Companies issue shares to raise capital. So why would they take no payment or only partial payment for them? This article explains:

What are full, nil and part paid shares?

In the last two cases the company will retain the right to call the balance of its unpaid share capital at some time in the future. Issuing a ‘call’ means that when they think the time is right the company will contact the shareholders and request payment for the unpaid or partly paid shares. Read more on calls and payments below. 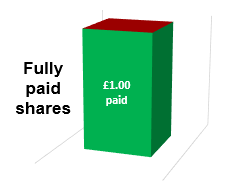 In the case of fully paid shares, the company receives the nominal share value. So for a £1.00 ordinary share to be fully paid the company will receive £1.00. Most shares issued by companies are fully paid.

With partly paid shares, the company receives some consideration for the shares but less than the nominal amount. So if, say, 60p is initially paid for shares with a £1.00 nominal value the shares would be partly paid or ‘part paid’. The remaining 40p could be ‘called’ by the company at a later date, meaning the shareholder would then have to pay it. 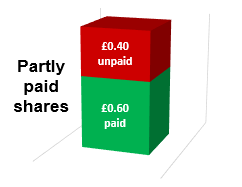 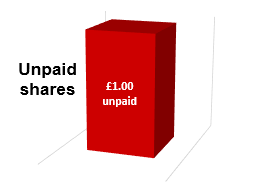 The company receives zero consideration up front for unpaid shares (which are also known as nil paid shares). The £1.00 of nominal value could later be called by the company, either as a single payment or a series of calls.

What about shares issued at a premium?

While many shares are issued at their nominal value, sometimes shareholders are willing (at least ultimately) to pay more than this book value. In cases like this where the market value is greater than the nominal value of the shares, the difference is called the share premium. 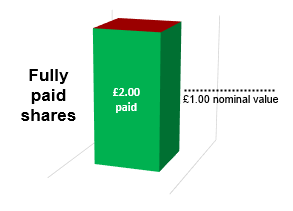 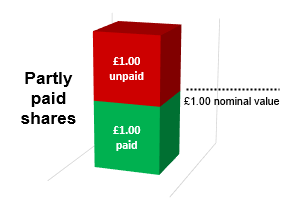 The company receives part of the consideration for a partly paid share but not all of it. There are a number of different possible scenarios. The amount that remains to be paid by the shareholders could be part or all of the share premium but might also include some of the nominal value of the share.

In the case of a nil paid share / unpaid share, the company has received no consideration up front. The £2.00, including both the nominal value and share premium, could be called by the company at a later date or dates. At that point, the shareholder would need to settle the amount(s) called.

Why would a company issue unpaid shares?

Although unpaid and partly paid shares are far less common than fully paid shares, there are several reasons why a company might choose to issue them.

In many cases, however, unpaid shares exist without the directors ever having really made a conscious decision to opt for them instead of fully paid shares. Sometimes this happens inadvertently when the company is formed – where an incorporation agent only offers formation with unpaid shares, or if a zero is entered in the wrong column on an SH01 form or statement of capital and the wrong details confirmed to Companies House.

In many cases … unpaid shares exist without the directors ever having really made a conscious decision to opt for them instead of fully paid shares.

Do paid and unpaid shares carry the same rights?

Unpaid and partly paid shares give the shareholder the same rights as fully paid shares in the same class. The prescribed particulars attached to the share class describe the shareholder’s rights to vote, receive dividends and transfer their shares. These are usually fully applicable regardless of how much of the nominal value of the shares is paid or remains unpaid.

If its articles permit, a company may pay a dividend in proportion to the paid-up amount on each share held by a shareholder, so that a larger amount is paid up on some shares than on others based on the owners’ holding in those shares.

Can a company have both fully paid and partly (or nil) paid shares?

Yes, subject to any provisions in the company’s articles of association or a shareholders’ agreement. Shares (often called subscriber shares) are allotted when a company is first incorporated. Further shares can be allotted at any time after incorporation. It does not follow that if the initial shares are nil paid all subsequent issues need to be the same type. Conversely, if the initial shares are fully paid there is no need for all subsequent shares to be. Accordingly a company can quite properly have both paid and unpaid shares, either by creating a new share class or even within the same share class.

When will holders of nil or partly paid shares be required to pay the balance?

The answer could be never. Much will depend on the success of the company and/or whether the terms of the shares specify a particular date or event which triggers the payment becoming due. If the company is in financial difficulty or needs capital to expand, the directors (or administrators in cases of financial difficulty) may conclude that it is in the best interests of the company to ‘call’ the unpaid nominal amounts on each share that is not fully paid. They will need to check that they have the right to do this (which they usually will unless it has been specifically excluded).

Unexpected share calls can sometimes lead to ‘surprises’ for shareholders years hence, often when they have long since ceased to have any involvement with the company. In some cases late share calls have been ruinous to shareholders. For a company’s options in situations where a shareholder for whatever reason fails to pay for their shares after a call, see our article on share forfeiture.

According to the Companies Act 2006 (581), if its articles of association permit it a company can offer different payment options to different shareholders when the shares are called, usually the amounts and times of payment. So following a share call, one’s repayment terms may vary depending on what was agreed at the time the shares were issued.

It is possible, articles permitting, for a company to accept part or full payment for amounts unpaid on shares without having first issued a call on those shares. A shareholder can choose to pay up some or all of their share value despite not being asked to. This could be done voluntarily to mitigate the potential shock of any future share calls from the company.

There may also be room for negotiation in some instances based on Companies Act (2006) (582), which states that shares can be paid up ‘in money or money’s worth (including goodwill and know-how).’

How does a company collect the balance?

In the ordinary course of events, the unpaid amount is requested by the company sending a ‘call’ notice. Take a look at our article covering how to process a call on unpaid amounts on shares, which also includes a number of free templates that can be adapted and used.

Yes, both unpaid shares and partly paid shares can usually be transferred to a new shareholder (subject to the company’s articles of association).

This article was originally written in 2014. In July 2022 it was thoroughly revised and updated.