When we looked at unpaid and partly paid shares and why a company might have them, we said that they could be transferred in a similar way to fully paid shares so the general process of how to transfer shares applies equally to them. However, one important difference is in the form that needs to be completed and lodged with the company. In another article we covered the process of completing the share transfer form for fully paid shares. Here we look at how to complete form J10, which usually needs to be completed to effect the transfer of nil paid or partly paid shares.

Our template J10 form can be used for share transfers of unpaid or partly paid shares. If you’re transferring fully paid shares, you should instead use the J30 form.

The remainder of this article goes through how to complete each part of the transfer form for unpaid shares. Once the J10 form is fully complete and has been accepted by the company, the company’s statutory registers will need to be updated – something that SMEs can do easily and for free using Inform Direct. 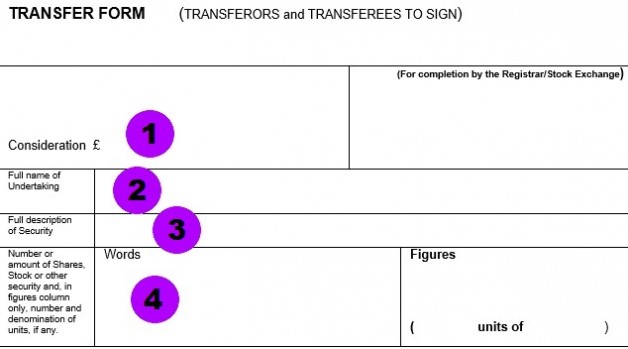 For transfers where money is being paid in exchange for the shares, enter the amount here. If no amount is being paid, enter ‘NIL’ instead.

This is the full name of the company whose shares are to be transferred.

Check the share certificate issued by the company for the full description to include here. It will usually be the share class – for example, Ordinary Shares of £1.00.

4 Number or amount of Shares, Stock or other Security

The number of shares to be transferred as part of this transaction should be entered as both words (on the left) and figures (on the right). If the holding is packaged into units, you’ll also need to enter the number of these units on the right hand side. 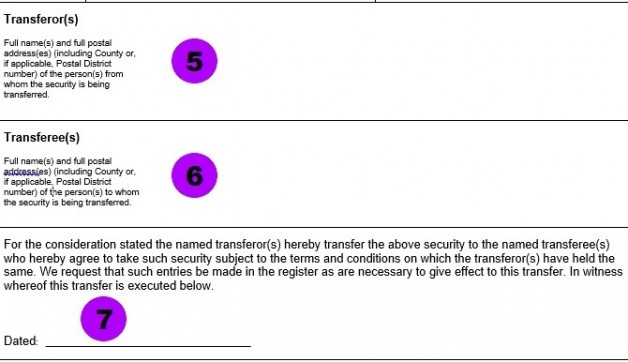 If a person other than the shareholder named on the company’s register of members is making the transfer, it’s important also to record the capacity in which they are signing the form. In the example of a deceased shareholder, the names of the legal personal representatives (executors or administrators) would be noted here.

Include here the name and address of the person who is to receive the shares and who will therefore also take on the responsibility for paying any further calls as they fall due.

For proposed joint shareholders, the name of each joint holder should be included – and in the order in which they should appear on the register of members. The company will generally only correspond with the first named joint holder, so it’s only their address that needs to be included here. Check out our article on the features of joint shareholdings for more details, particularly on cases in which a company might choose not to process a transfer to a joint shareholder.

This will be the date when the transferor(s) and transferee(s) sign the J10 form to effect the transfer of the unpaid or partly paid shares. 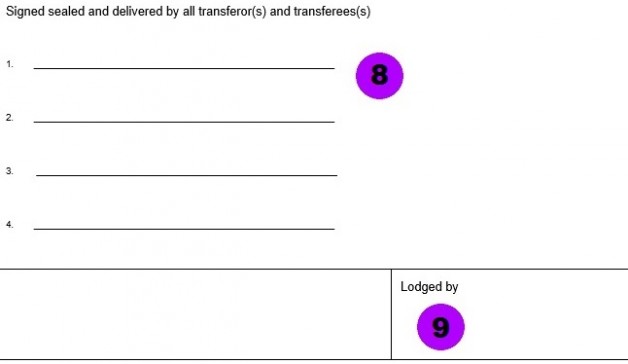 8 Signatures of all Transferor(s) and Transferee(s)

Unlike the standard J30 transfer form for shares that are fully paid , form J10 requires the signatures of both the person transferring the shares and the person receiving them.

If either the transferor or transferee is a joint shareholder, the signature of each joint holder is required. Even though the standard form only shows four spaces for signatures, if there are more than four parties to the transfer they still all need to sign the form.

Enter the details of the person lodging the certificate with the company, particularly if the share certificate in respect of the new holding should be posted to someone other than the person detailed on the form J10 as the transferee (or named first among multiple transferees).

The certificates on the reverse of the J10 form deal with whether stamp duty is payable as part of the share transfer. They are exactly the same certificates as appear on other share transfer forms, so for full details take a look at our guide to the J30 form.

We offer a lot more information about share transfers in other articles, starting with a step by step guide to transferring shares.