During the life of a company many important decisions must be passed via resolutions under the Companies Act 2006. An ordinary resolution is the most common of these as rarer and fewer decisions require a special resolution.

Most companies pass at least one of these each year. This is done by achieving just a ‘simple majority’ – more than 50% of votes cast – of members voting ‘for’ it (members are the shareholders in a company limited by shares).

In this article we will cover:

Inform Direct produces populated board minutes and written resolutions including the required resolutions, all as part of the process.

What is an ordinary resolution?

What decisions require an ordinary resolution?

Certain (more important) company decisions are required to be made by a special resolution which require at least 75% of the votes cast to be passed.

How is an ordinary resolution passed?

An ordinary resolution is passed by what is referred to as a ‘simple majority’ of members, meaning that the votes ‘for’ must equate to more than 50% of the total votes cast by each member’s voting rights.

The resolution is either:

Note that there are two ordinary resolutions that cannot be passed by a written resolution:

As you will see in most general meetings (at least for small, non-public companies) an actual calculation is not required. A simple show of hands often provides enough to show which way the simple majority lies.

As part of a board meeting, the board of directors decided to propose the appointment of a new director. It was decided that this would be proposed as an ordinary resolution at the upcoming annual general meeting (AGM).

At the meeting, voting commenced on the proposed ordinary resolution to appoint the new director. The company has 2,400 shares with equal voting rights, which are split between 8 shareholders in varying proportions. Only 4 shareholders were present at the meeting and voting. Two other shareholders cast votes by proxy. The result of the vote was as follows:

As the votes ‘for’ the ordinary resolution were greater than 50%, the resolution passed. This was recorded in the minutes of the meeting.

If the 2 shareholders that didn’t take part had voted against the appointment, the votes ‘for’ would have totalled 50% and hence the resolution would not have passed as this is not greater than 50%.

Which resolutions must be filed with Companies House?

Certain company decisions that can be passed via an ordinary resolution require special notice to be provided to all shareholders at least 28 days prior to the ordinary resolution being voted upon. In fact, the Companies Act 2006 states that the company must “…where practicable, give its members notice of any such resolution in the same manner and at the same time as it gives notice of the meeting”.

The decisions that require such special notices are:

Are there additional requirements for ‘listed’ companies?

Companies that have their shares listed for trading on a market must provide two copies of all resolutions passed to the FCA’s ‘primary market functions’ department immediately (previously referred to as the UKLA), who will make them available for public inspection.

Where performing company secretarial duties for a ‘listed’ PLC we’d recommend that you seek advice from an expert in such companies.

This article was originally published in January 2013 and has been completely revised and updated for accuracy and comprehensiveness. 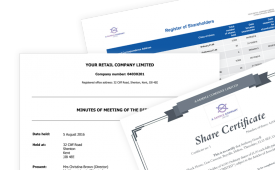 Use Inform Direct to create registers, share certificates and other documents with ease