Once again, we’ve performed some in depth number crunching and released our Inform Direct 2019 Review of UK Company Formations.

Built using data from Companies house and the Office of National Statistics, our study forms the most comprehensive analysis of 2018 UK company incorporations and dissolutions.

Alongside the national statistics, we also break down the data for each nation of the UK and individual counties, so you can follow the performance of businesses from Devon to Durham. You’re able to drill down still further, and explore company formation performance in individual districts and even wards across the country.

In this article, we look at what we’ve learnt about the condition of UK business from the annual figures.

A record year for company formations…

That’s great news for UK business – with the number of company formations often seen as a leading indicator for the health of UK business and a measure of confidence among budding entrepreneurs. Overall, our study presents a very positive picture against a background of political and economic uncertainty, showing that the UK continues to provide a supportive environment for enterprise.

It’s a particularly welcome sign that the slowdown signalled in the 2017 figures has not continued. While the prospect of Brexit – in whatever form it takes – continues to hang over parts of the business community, apparently discouraging investment and growth for many businesses, our figures show that a record number of entrepreneurs felt confident enough to form a company to pursue their next business venture.

… But a concerning number of companies dissolved

While there will be natural turnover in the company population – where a company has already served its purpose or a business venture is no longer being pursued, for example – a surprisingly high number of companies fail, perhaps a sign of a challenging business climate. There is a mixed local picture of the free support and advice available to new and growing businesses, with many services cut in the last few years.

Education can also play a role in helping those forming a business for the first time become aware of their statutory responsibilities, and the consequences of their choice of business structure. With so many companies struck off by the regulator because they’ve failed to file accounts or the annual confirmation statement, it’s clear that many first-time directors struggle to understand and manage the requirements of their new company.

This is also an area where good choices by a new business, in appointing a good accountant and making use of helpful business software like Inform Direct, can make a big difference to their chance of survival.

The impact of regional variations

While far from universal, the pattern of record-breaking company formation figures reached across geographically diverse areas of the UK. There were all-time high formation figures for London in the south and Lancashire in the north, as well as both urban Hackney and rural Herefordshire.

There were, however, still some significant variations between different parts of the UK: 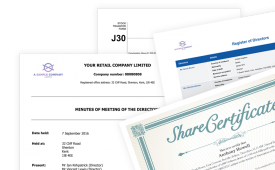