As the Office of National Statistics reports that UK economy grew an estimated 0.6% in the three months to June, there’s more good news for UK businesses tucked away in the newly published Companies House summary of company registration activities for 2012/13. Although the patient still shows some signs of its recent illness, there looks to be a positive prognosis for UK plc (and UK Ltd and UK LLP, as the aggregate Companies House data we’re looking at here combines all types of company across England and Wales, Scotland and Northern Ireland).

The new company incorporation count, often seen as a proxy for optimism within the economy, continues to increase. The 479,500 UK incorporations in 2012 exceeds the previous highpoint of 443,800 in 2007, before the financial crisis took its toll on confidence amongst those who might have been considering setting up a new business. The most up to date data show more good news, with the 40,082 incorporations in the month of June up nearly 11% on the same month in 2012. 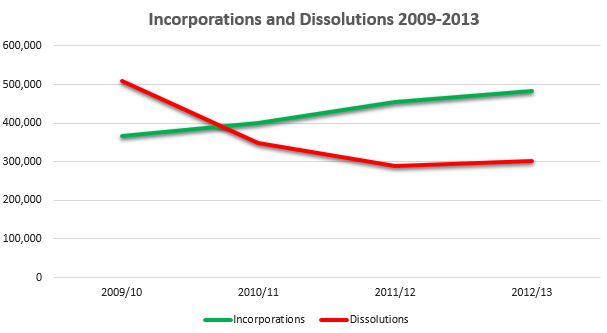 Although the number of companies being dissolved hasn’t in the last year continued its steady fall since the nadir of the financial crisis, it looks to have levelled out. Because the rise in incorporations is higher than the very small rise in dissolutions, the net increase in active companies recorded by Companies House is higher than at any point since the financial crisis began.

It also means that today there’s a record number of active companies in the UK. Although a small number are in the process of being removed, for the first time there’s over 3,000,000 UK companies on the Companies House register. A huge number of these are recently formed companies, as the following breakdown of currently registered companies by date of incorporation demonstrates.

47.5% of companies on the current register were formed since the start of the financial crisis – including 1,446,300 new company incorporations from the start of 2008 to today. The number of older companies will in part be explained by the sheer number which have been dissolved since 2007 as trading conditions across the economy have proved so difficult. Alongside this, however, there are great numbers of people who have started a new enterprise in this challenging environment. While many of these will have been formed out of necessity, particularly for those tradespeople displaced from other businesses experiencing difficulties, there are also many cases of people identifying business opportunities and not being afraid to pursue them via a new company formation.

Some of the best businesses are those formed in difficult economic times, when there’s so much emphasis on budgetary control and getting the basics right. As they’re more likely to be small (as the proxy statistic below on issued share capital suggests) and nimble, they can react more quickly to opportunities and threats in the competitive environment. They also tend to be owner managed businesses, where the shareholder managers have every interest in working to make the business a success.

As the economy continues to grow, so the theory goes, those companies that have started off with iron discipline will be well situated to reap the rewards of that prudence and better placed to deal with any obstacles along the way. These (hopefully) high quality, sustainable, well run businesses should also be good for their suppliers and customers in addition to employees and shareholders.

So, the number of new businesses is increasing. Does it matter? Is there really a relationship between the growth of new companies registered with Companies House and the health of the economy? Below we’ve plotted the change in the annual rate of new company incorporation against annual GDP figures from the Office of National Statistics.

While this only looks at a limited time period, there does seem to be a good relationship between the rate at which new incorporations increase (or decrease) and the percentage change in GDP. As might reasonably be expected, the change in the rate at which companies are started often appears to be something of a leading indicator, meaning we could look at the number of incorporations (alongside other measures) to forecast GDP growth. With incorporations in 2013 so far running at 6.5% above the equivalent period in 2012, it’s one further positive sign that the UK’s recovery can be sustained.